With over 25 albums to his credit, Bruce Cockburn is a veteran of the music business. Primarily a folk/rock based singer/songwriter, his music has also encompassed many other styles, including jazz, blues, reggae, and other world musics. He is a keen interpreter of his environment, both external and internal. A skilled lyricist and musician, his music is always evolving. 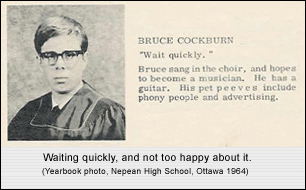 Born in 1945 in Ottawa, Ontario, Cockburn early discovered the music of Elvis Presley and Chuck Berry, which would set the course for his life. With an old guitar given to him by an aunt, he was soon playing along to their records and in time exploring music styles beyond the rock of the day, such as jazz and blues. He was also getting into the beat writings of Jack Kerouac and Allen Ginsberg, which would also have a big influence on him. Upon leaving high school, he travelled around Europe, busking on the streets of Paris (and spending a night in jail there for performing without a license) and getting a taste of the bohemian life.

Returning to Canada for a short time, he decided to attend the Berklee College of Music in Boston. Majoring in music composition, he spent more time seeing local jazz performers and jamming with others than he did on his studies. Realizing he wasn't willing to put the commitment in that was required, he returned to Ottawa after 2 years (receiving an honorary degree 31 years later, in 1997) where he soon hooked up with local poet and musician Bill Hawkins and his band The Children. Hawkins encouraged the budding artist to write his own songs, leading to Cockburn playing in a variety of other area bands ranging from blues to psychedelic rock through the next few years, honing his skills. 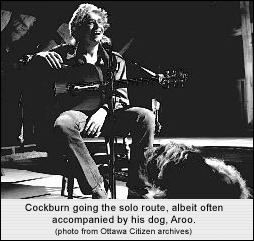 1969 was a pivotal year in his life as he decided to forge a solo career, feeling that the songs he was writing worked better with just voice and acoustic guitar. In Toronto, where he was now living, he met Bernie Finkelstein who became his manager. Cockburn also became the first artist signed to Finkelstein's True North record label, a partnership that continues to this day. At the end of the year, Cockburn and his girlfriend Kitty were married and he recorded his first solo album. An introspective, poetic folk album, he followed it up with the similarly styled, though more mature, High Winds White Sky. Developing a strong following in his native Canada and receiving favorable critical reviews, he spent the next few years with Kitty and their dog in a camper, criss-crossing the country performing.

Each successive album expanded on the previous, adding more textures and sounds. Sunwheel Dance contained his first recorded political song, the anti-war "Going Down Slow". At this stage in his career, songs like this were the exception, though. Themes of nature, spirituality, and love informed most of his 1970's output. Always a spiritual searcher, Cockburn converted to Christianity in 1974. It would be a major feature in his lyrics through the next few years, though to call him a "Christian singer" would be a misleading categorization. Unlike many other Christian musicians, his songs veered away from the evangelical and fundamentalist and were almost mystical (a word that's often been applied to him) and had much in common with Eastern religions, such as Buddhism. 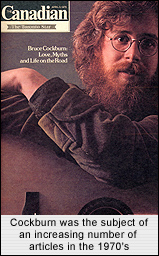 His daughter was born in 1975, and the next year the adventurous album In The Falling Dark increased his popularity greatly. Jazz textures were prominent, with supple percussion and flute augmenting many of the tracks. Circles in the Stream, his first live album, was recorded in 1977 at Toronto's Massey Hall and is still considered one of his best releases. Yet it was Dancing in the Dragon's Jaws, released at the end of the decade, that propelled him into the mass musical consciousness with its hit "Wondering Where The Lions Are". A bouncy song with a reggae feel, it garnered him a performance slot on hit t.v. show Saturday Night Live, exposing him to a wide U.S. audience.

Yet, all was not going perfectly in Cockburn's life, and he and Kitty were divorced just as his music was becoming more known. This breakup fueled many of the songs on his landmark 1980 album Humans, and a harder, more rock-oriented edge was beginning to show in his work. Always wary of being pigeonholed or typecast, he felt he was being limited by the "gentle folkie" tag that was often applied to him. Inner City Front, his next album, found him living in the harder urban surroundings of downtown Toronto and adopting a much more electric guitar-and-drums approach. It was a conscious effort to move out of his past style, resulting in the loss of some fans, but the exposure of his music to a wider audience. In addition, Cockburn produced the album by himself, without the aid of long-time friend Eugene Martynec (who had produced all his previous efforts). 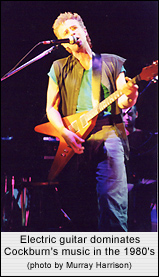 A trip to Central America as a representative of international aid organization OXFAM in 1983 opened his eyes to the injustices and oppression of third world life. It would have a major effect on his life and work from then after. "If I Had A Rocket Launcher" was written after witnessing Guatemalan refugee camps in Mexico being attacked by their own military's helicopters. An uncharacteristic song in his repertoire, he thought twice about releasing it. Surprisingly, it would be his second sizeable hit, garnering heavy radio play throughout the U.S. and Canada. The 1980's would be a time of intense travel for Cockburn, and images and influences from places as diverse as Tokyo, Europe, Central America, Chile, Jamaica, and Nepal found their way into his songs.

After conquering a temporary writing block, he shifted gears and entered the 1990's with a more introspective, roots-rock and folk sounding release, the acclaimed Nothing But A Burning Light. It would also be his first album recorded outside of Canada (in California) with primarily non-Canadian musicians. In addition, Columbia Records was now his U.S. record label and they re-released the majority of his back catalog on cd for the first time. Cockburn returned to jazzier 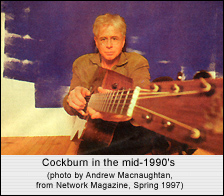 instrumentation with the darker The Charity of Night in 1996, while "Last Night of the World" (from the follow-up Breakfast In New Orleans, Dinner In Timbuktu) became his biggest single since "If I Had A Rocket Launcher". The late 1990's saw him very involved with the effort to ban landmines worldwide, participating in many fundraising activities and shows and visiting war-torn countries such as Mozambique and Cambodia.

Ending a long and grueling concert tour schedule in early 2001, he took a year off to recharge his batteries. In March of that year, he was inducted into the Canadian Music Hall of Fame by Gordon Lightfoot and environmentalist David Suzuki. 2002 promises to be a Cockburn-filled year as a collection of tracks from the later two thirds of his career (plus two new songs) was released in January, and a series of remastered-with-bonus-tracks reissues of his back catalogue by True North is scheduled as well as an album of new material.